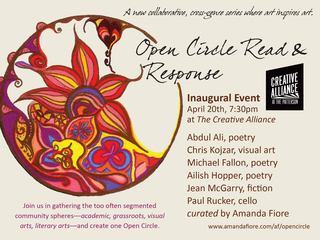 National Poetry Month is on its way and the poets of the English Department are coming out in force. Michael Fallon, a Senior Lecturer and esteemed poet, will be reading his work in a one of a kind experience with music and art at the inaugural event for Open Circle Read & Response at The Creative Alliance. The event will be hosted on April 20, 2016 at 7:30 PM at 3134 Eastern Avenue in Baltimore, MD 21224. Please join him for this exciting event. Participants include:
Michael Fallon has taught creative writing, literature, and composition at UMBC since 1985. Fallon has edited the literary magazines Puerto del Sol (1980-81) and the Maryland Poetry Review (1984-91) of which he was founding editor. Poems have appeared in the American Scholar, the Antietam Review, Sin Fronteras, the Oyez Review, and many other literary magazines, CDs, anthologies, and broadcasts on WYPR’s The Signal and other public radio programs. Essays, reviews, and articles have appeared in the Maryland English Journal, Lite Magazine, the Loch Raven Review, and other magazines. He is the author of three collections of poetry: A History of the Color Black, published by Dolphin-Moon Press in 1991; Since You Have No Body, winner of the Plan B Press Poetry Chapbook Competition and published in 2011; and The Great Before and After, published by BrickHouse Books in 2011. His book of poems, House of Forgotten Names, was accepted by Salmon Press or Ireland and will be published in 2017.
0 Comments (requires login)