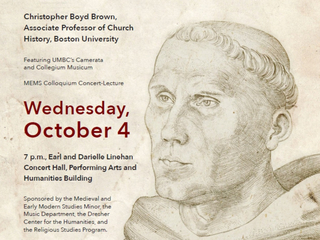 Dr. Christopher Boyd Brown and UMBC’s Camerata and Collegium Musicum will present an interdisciplinary concert-lecture on Martin Luther’s use of music and the community practice of hymn-singing in the Protestant Reformation. Brown will discuss how Lutheran hymns, sung in the streets and homes as well as in community spaces, were central to the success of the Reformation. UMBC students will provide live musical examples of plainchant, Reformation hymns, and multi-part choral works by Walter and Bach.
Biographical Statement: Christopher Boyd Brown is a recognized scholar of Martin Luther and Reformation music. He has published Singing the Gospel: Lutheran Hymns and the Success of the Reformation (Harvard University Press, 2005) and several studies on the role of midwives in early modern Lutheranism. His translations of Luther and early modern Lutheran theological texts can be found at http://www.projectwittenberg.org/etext/luther/.
This event is sponsored by the Medieval and Early Modern Studies Minor, the Music Department, the Dresher Center for the Humanities, and the Religious Studies Program.
0 Comments (requires login)