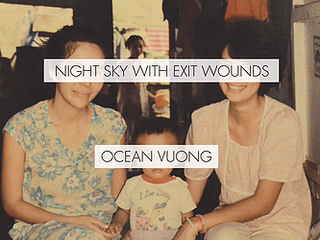 The UMBC English Department invites you to the next installment of the 2015-2016 Reading Series, featuring poet Ocean Vuong.
Born in Saigon, poet and editor Ocean Vuong was raised in Hartford, Connecticut, and earned a BFA at Brooklyn College (CUNY). Vuong writes of his experiences in Vietnam, in refugee camps, and of coming to the United States. His work is grounded in these experiences as well as his Buddhist practice.
Ocean Vuong is the author of two chapbooks, No and Burnings.  His honors include fellowships from the Elizabeth George Foundation, Poets House, Kundiman, and the Saltonstall Foundation for the Arts as well as an Academy of American Poets Prize, an American Poetry Review Stanley Kunitz Prize for Younger Poets, a Pushcart Prize, and a Beloit Poetry Journal Chad Walsh Poetry Prize. In 2014, Vuong was awarded a Ruth Lilly and Dorothy Sargent Rosenberg Poetry fellowship from the Poetry Foundation.
diaCRITICS writes that No “is both a mourning of death and a celebration of life lost too soon. With No, Vuong has shown maturity and bravery in both his subject matter and his experimentation in structure, technique, and imagery. His dreamlike language stuns and haunts the mind. But most importantly, Vuong breaks your heart and puts it back together. In these survival poems, he shows us the human spirit at its most vulnerable as it tries to heal yet never does so completely.”
Vuong’s first full-length work Night Sky With Exit Wounds is forthcoming from Copper Canyon on April 12th. Publishers Weekly included his forthcoming book in the 2016 Poetry Top Ten, saying “In his haunting and fearless debut, Vuong walks a tightrope of vulnerability and reflects upon his family in exile, a reverential queer love, and the personal adoption of a sometimes inexplicable nation.” Buzzfeed listed it as one of the Most Exciting New Books of 2016, arguing “this book is a masterpiece that captures, with elegance, the raw sorrows and joys of human existence.”   Even Teen Vogue recently included Vuong as one of six poets “Who Prove The Genre Is Still Cool” and called the debut “a buzzy new collection.”
This event is sponsored by the English Department, the Dresher Center for the Humanities, and Asian Studies. Light refreshments and a book signing will follow the reading on April 18, 2016 at 5:00 PM in the Skylight Room.
2 Comments (requires login)