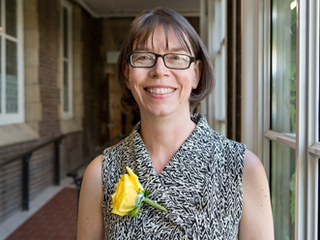 The Medieval and Early Modern Studies Minor program is pleased to announce its Fall 2015 lecture. Joining us from Concordia University, Montreal, Dr. Shannon McSheffrey will be presenting her recent research on women and marriage in late medieval London, including her work in digital humanities.
In her lecture, McSheffrey will focus on a case study. In the spring of 1488, Margaret Heed, a young London woman about seventeen or eighteen years old, dithered about whether she would marry the man her father chose for her or another man whom she clearly preferred. Margaret's dilemma highlighted a medieval paradox: young unmarried women were amongst the most powerless persons in medieval society, and yet at this one juncture in her life, as she was about to get married, a young woman held a particularly powerful card, as her consent was necessary for a marriage to be valid. Margaret's story is a medieval one, but it is also a twenty-first century digital humanities tale. We have more information than ever thanks to the digital revolution, but to interpret Margaret's story, as is the focus of McSheffrey's talk, we also need the humanities to teach us how to read the subtleties of the evidence and indeed to remind us about how much we still do not know.
To review some of McSheffrey's work, visit http://digitalhistory.concordia.ca/consistory/index.php, a database she manages relating to the late medieval London Consistory court.
2 Comments (requires login)