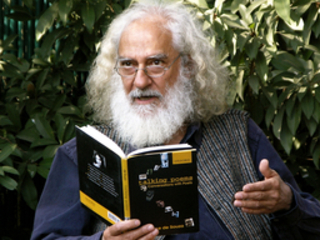 Arvind Krishna Mehrotra, one of India's most celebrated contemporary poets and an acclaimed translator of Indian literature, will talk about how three important Indian poets (Toru Dutt, AK Ramanujan, and Arun Kolatkar) translated the Indian classics. Translation is never simple, but these Indian translators added to their translations many strands, giving their work the feel of a multicolored rope. Toru's translation of a Purana story would be unthinkable without her Christianity; Ramanujan's translations of Sangam poetry, Nammanlvar, and the Virasaiva poets without Modernism; and Kolatkar's of the Marathi bhakti poets without the American idiom, which he sometimes employed in his own poems as well. While these translations bring past and present together in the ongoing construction of India’s literary heritage, they also lead us to ask broader questions: Are the Indian poet-translators exemplars of 'world lit.' or do they bring a particularly 'Indian' perspective to translation; or is it both?
Arvind Krishna Mehrotra is a noted Indian English poet, anthologist, literary critic and translator. He is the author of four books of poems and one of translation (a volume of Prakrit love poems reissued in Penguin Classics). His Oxford India Anthology of Twelve Modern Indian Poets (1992) has been a significant and influential work in Indian poetry. He has edited several books of translation and critical writing, including An Illustrated History of Indian Literature in English (2003). In 2009, he was nominated for the chair of Professor of Poetry at the University of Oxford.
This event is sponsored by the Dresher Center for the Humanities and by the Asian Studies Program; the English Department; the Global Studies Program; and the Modern Languages, Linguistics, and Intercultural Communication Department.
0 Comments (requires login)