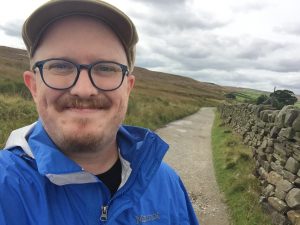 Matthew Poland, ’08, is a former undergraduate student who is now pursuing doctoral studies and a certificate in digital and textual studies at the University of Washington. Read about his experience at UMBC and post-graduation work below:

I owe quite a lot to the UMBC English Department. I took several classes with another English major, Kayleigh Somers, and we ended up getting married. That would be the most important thing. I’m also grateful to Dr. Michele Osherow for being an extraordinarily generous teacher and mentor. In between those, I’m grateful for the university’s and the department’s commitment to undergraduate research, which has shaped my experience ever since.

I realized I wanted to be an English major about three weeks into my first semester. To that point it had been a toss-up between English and History, but then we did a close reading of a Philip Larkin poem in Dr. Jean Fernandez’s class (“Church-Going”?) and I was sunk. I was lucky to have felt a sense of calling so early. Especially now that I teach undergraduates myself, I am amazed at the high level at which we were expected to read, discuss, and research from the get-go but also at the trust and support offered by the faculty. Dr. Gail Orgelfinger’s seminar on non-canonical Middle English literature, Dr. William Edinger’s on Yvor Winters and modernist and formalist poetry, not to mention the wide-ranging period survey courses: these deep dives were remarkable for what we read, but more than that they were valuable for the practice of deep-diving itself.

Immersing myself in an unfamiliar, complex body of work and then attempting to make sense of it through writing—that is to say, research—is a practice I was first exposed to at UMBC and which I’ve subsequently used in a range of settings. When I approached Dr. Raphael Falco about pursuing a PhD, he advised me to try out a few other things first to make sure it was what I really wanted. I didn’t buy his argument at the time but ended up following his advice anyway. Through a period as a production assistant at the NPR station in Baltimore and then a spell in the tech industry as a researcher at IBM and Microsoft, I returned to the skills of close attention and finding connections in a range of material I first learned from literary study.

The same simple sense of calling I felt as a freshman has led me back to English, and the creative challenge of my work now is to weave together the strands of my interests. While at the University of York, I became fascinated by book history—the study of books as objects, how they were made, circulated, and then used by readers. This period of hanging around rare book rooms led me to pursue library and information science—an expansive field more English undergrads should consider—where I learned about the organizational concepts that shape the physical and digital materials used by scholars and students. Now, as a doctoral student at the University of Washington (UW), I’m particularly interested in Victorian novels and libraries as repositories of literary history, in how the ways the Victorians collected and used older book objects continue to shape our understanding of literary culture. Maintaining my interest in digital tools, I am also working with UW librarians on a research dataset of bibliographical metadata that is overlooked in catalogue records of rare books, especially bookbindings.

I could not have anticipated this set of interests when I graduated in 2008, embarrassingly nerdy about Seamus Heaney and Shakespeare (still am), not yet patient enough for the “loose baggy monsters” by Dickens and George Eliot, which fascinate me now. But the sense of research as a creative and ethical principle, which I learned at UMBC, has allowed me to take whatever openness I possess and turn it into generative activity. That this is only the second-best thing that happened to me at UMBC should start, I hope, to convey how grateful I am.

For more information on Poland and his research, please visit https://english.washington.edu/people/matthew-poland.

This spotlight was originally published on February 13, 2018.