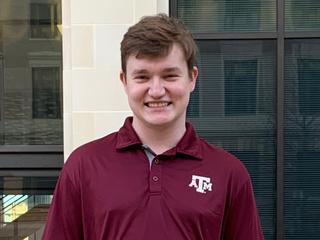 Start your weekend with a success story! A new alumni spotlight has been posted on our website: https://english.umbc.edu/alumni-spotlight/

Zachary Riggins, '18, is a former UMBC English student who is a PhD student in English at Texas A&M University. Read about his experience at UMBC and post-graduation work below:

When I first started at UMBC in the fall of 2015, I thought of myself first and foremost as a pre-med student focusing on obtaining a degree in biology but entertaining the possibility of also majoring in English. However, after my first experiences within the English department, my passion for literature became undeniable. While it was the course content which solidified my interest in the major, I found my interaction with the department’s faculty to be truly invaluable. As a first generation college student, it was easy to feel adrift; I was unfamiliar with the expectations of academia and frequently accosted by friends and family who demanded explanations about my career path. The faculty helped both to familiarize me with academia and to provide a language with which I could articulate the skills I developed and their value to the modern world.

After graduating from UMBC in May of 2018, I have spent the past year and a half in the English PhD program at Texas A&M University. I am still working on refining my scholarly interests, but recently I have been most interested in exploring the connections among trauma, identity, subjectivity, and gender in 20th and 21st century texts; I am planning on obtaining a graduate certificate in Women’s and Gender Studies. Besides taking classes, I also hold a Graduate Assistantship. In my first year I worked as a research assistant for the World Shakespeare Bibliography, a searchable electronic database for Shakespeare scholarship. In that capacity I prepared and submitted annotated entries for recent monographs, book chapters, and journal articles which had a focus on Shakespeare in any form. For the remainder of my assistantship I will work as an instructor; I am currently teaching a rhetoric and composition course intended for underclassmen. As I continue to explore the world of academia, this time from the position of course instructor, I hope to pass on what I learned from my professors at UMBC and serve as a liaison for other first generation students unfamiliar with or intimidated by academia.